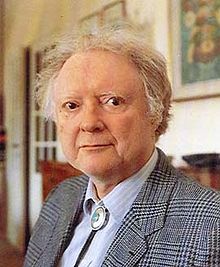 Tullio Regge (July 11, 1931 – October 23, 2014) was an Italian theoretical physicist. He obtained the laurea in physics from the University of Turin in 1952 under the direction of Mario Verde and Gleb Wataghin, and a Ph.D. in physics from the University of Rochester in 1957 under the direction of Robert Marshak. From 1958 to 1959 Regge held a position at the Max Planck Institute for Physics where he worked with Werner Heisenberg. In 1961 he was appointed to the chair of Relativity at the University of Turin. He also held an appointment at the Institute for Advanced Study of Princeton from 1965 to 1979. He was emeritus professor at the Polytechnic University of Turin while contributing work at CERN as a visiting scientist. In 1959, Regge discovered a mathematical property of potential scattering in the Schrödinger equation—that the scattering amplitude can be thought of as an analytic function of the angular momentum, and that the position of the poles determines power-law growth rates of the amplitude in the purely mathematical region of large values of the cosine of the scattering angle. This formulation is known as Regge theory and had a strong influence on the High Energy Physics of the ‘60s and ‘70s so that his name was well-known everywhere, in particular in the Soviet Union. The prediction of Regge trajectories, a part of Regge’s theory which tries to explain slowly rising cross section of hadronic collisions at high energies, was first demonstrated at CERN at the Intersecting Storage Ring (ISR). In the early 1960s, Regge introduced Regge calculus, a simplicial formulation of general relativity. Regge calculus was the first discrete gauge theory suitable for numerical simulation, and an early relative of lattice gauge theory. In 1968 he and G. Ponzano developed a quantum version of Regge calculus in three space-time dimensions now known as the Ponzano-Regge model. This was the first of a whole series of state sum models for quantum gravity known as spin foam models. In mathematics, the model also developed into the Turaev-Viro model, an example of a quantum invariant. Other important contributions were the theory of vortices in liquid Helium and exact solution to the Ising model on finite lattices.

There is an asteroid that bears his name, 3778 Regge.