Abstract: I will discuss supersymmetric AdS_3 solutions in F-theory, that is Type IIB supergravity with non-trivial varying axio-dilaton, which are holographically dual to 2d superconformal field theories preserving at least (0,2) supersymmetries. The aim of this work is to set up holography in the context of F-theory, which are traditionally two distinct areas of string theory. The talk will be based on the arXiv papers 1705.04679 and 1712.07631.

Abstract: String theory is deeply connected with different areas of modern mathematics. The gauge/gravity duality is one of the main lessons of string theory: besides offering new perspectives on difficult physics problems, it inspires and motivates research in mathematics. After setting up the stage with a brief introduction, in this talk I will discuss a number of geometric structures that arise in string theory, that have an independent mathematical interest. The topics of the talk will span a large period, and will include the role of torsion, Sasakian geometry, and some examples of special metrics in K\”ahler geometry.

Abstract: String theory is the evolution of theoretical constructions developed during the past century, embracing and extending general relativity and quantum mechanics. One of the lessons of string theory has been the discovery of relationships between seemingly different theories, called dualities. In particular, the gauge/gravity duality postulates that a theory of gravity is equivalent to a quantum field theory in one lower dimension. In this seminar I will explain why imagining the universe as a holographic projection of a lower dimensional space-time has radically changed the way we think about fundamental questions in theoretical physics.

Dario Martelli studied Physics at the University and the Scuola Normale Superiore of Pisa, and obtained his PhD from SISSA in Trieste. He held research positions at CERN and IAS-Princeton. In 2010 he joined the Department of Mathematics of King’s College, where he became a Professor in 2013. He held an EPSRC Advanced Fellowship and an ERC Starting Grant to lead research at the interface of string theory, gauge theory, and geometry. In 2010 he won the SIGRAV Prize for his work in string theory. He collaborated with Prof S.-T. Yau, on Sasaki-Einstein geometry and its relationship to string theory, and with Prof J. Maldacena on aspects of the string theory/gauge theory correspondence. Dario’s research interests are centred around the gauge/gravity correspondence in string theory and geometric structures arising in this context. In particular, he is interested in supergravities and their supersymmetric solutions. He discovered the first example of an infinite family of Sasaki-Einstein metrics and obtained important results in Sasakian geometry. 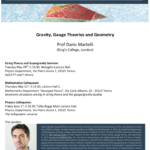 MENU
Manage Cookie Consent
To provide the best experiences, we use technologies like cookies to store and/or access device information. Consenting to these technologies will allow us to process data such as browsing behavior or unique IDs on this site.
Manage options Manage services Manage vendors Read more about these purposes
View preferences
{title} {title} {title}